The Guilds are magimystical organizations that each specialize in various magiqal arts. Individuals are sorted into a guild via a test in Ackerly Green's Guide to Magiq.

A seventh guild - dubbed 'The Unnamed' - has been mentioned within the MAGIQverse lore, however little is known about the actual guild. Individuals who contribute to The Monarch Papers Patreon are said to be a part of the seventh guild[1]. In addition, the second Magimystical Assessment included a question asking for the name of the unofficial seventh guild.

During the Second Magimystical Assessment, various traits were assigned to the guilds and used to navigate a 3D model of The Translation. The traits were as follows[2]:

In September of 2019, during the Search for Magiq Initiative, the Mountaineers discovered a piece of the Guide to MAGIQ which had previously been lost through a password-protected online portal[3]. According to Saberlane, old Ackerly Green paperwork from the Book of the Wild hinted at this, describing a revised edition of the Guide which contained a test to determine one's guild bearing, without clarifying whether the test was ever completed.

Guild Bearings appear to be sub-classifications that serve to identify particular affinities or tendencies within the six Guilds. Each Guild has three unique bearings which correspond to the Sun, Moon, and Eclipse, respectively, and each Bearing has a particular Affinity.

According to information acquired from Steve the Balimoran, the Guilds were once Royal Houses within an organization known as the Order[5]. The Royal Houses were known as the House of Flints, the House of Baymor, the House of All Ebgorad, the House of the Watchers, the House of Mer Gost, the House of Thorinth, and the House of the Unnamed. Each of the Houses guarded one of the core tenets of the Order to keep it from those who would misuse it. At some point in time, the Houses no longer functioned as traditional royalty and the titles, while they were once symbols of power, became ceremonial. Power and decision making was moved to The Collector, First Council, and The Acolytes. Each House was represented by its Lepidoptera family. The butterflies were chosen because they have a power to see what most cannot, including objects in nature and built by man that sit unseen, out of shift. The activity of the Houses remained a secret even from one another, in order to protect The Faith. 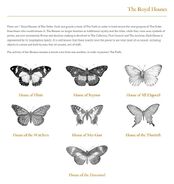 Retrieved from "https://magiq.fandom.com/wiki/The_Guilds?oldid=2793"
Community content is available under CC-BY-SA unless otherwise noted.